There she was, right in front of me.
She was looking at me, and I was looking right back at her.
She had this mysterious smile on her face.
It was one of those moments you never forget.

I hope you’ll indulge me, because today I want to share a love story.

Like all the best love stories, this one starts in Paris, in the wintertime. A ruggedly handsome, slightly delusional, Australian man was traveling alone.

I found myself in front of one of the most iconic buildings in Paris: the Louvre museum. On a whim, I decided to venture inside. As I descended into the glass pyramid, I could feel the culture and history starting to envelop me.

After an hour of wandering around, I discovered a long hallway, and at the end, it opened into an enormous open room.

Now this all sounds very romantic, but you see, there was one big problem.

She was the La Jaconde, better known as the Mona Lisa.

She is the most famous painting in the world. She is valued at three quarters of a billion dollars. She was stolen once and hidden in a basement for two years. Today she sits behind bullet proof, humidified glass, under constant security surveillance.

The reason she is so famous? Because she looks at you, while you look at her.

Here I was, about to come to face to face with her.

However there was another problem… I wasn’t the only one wanting to see her. 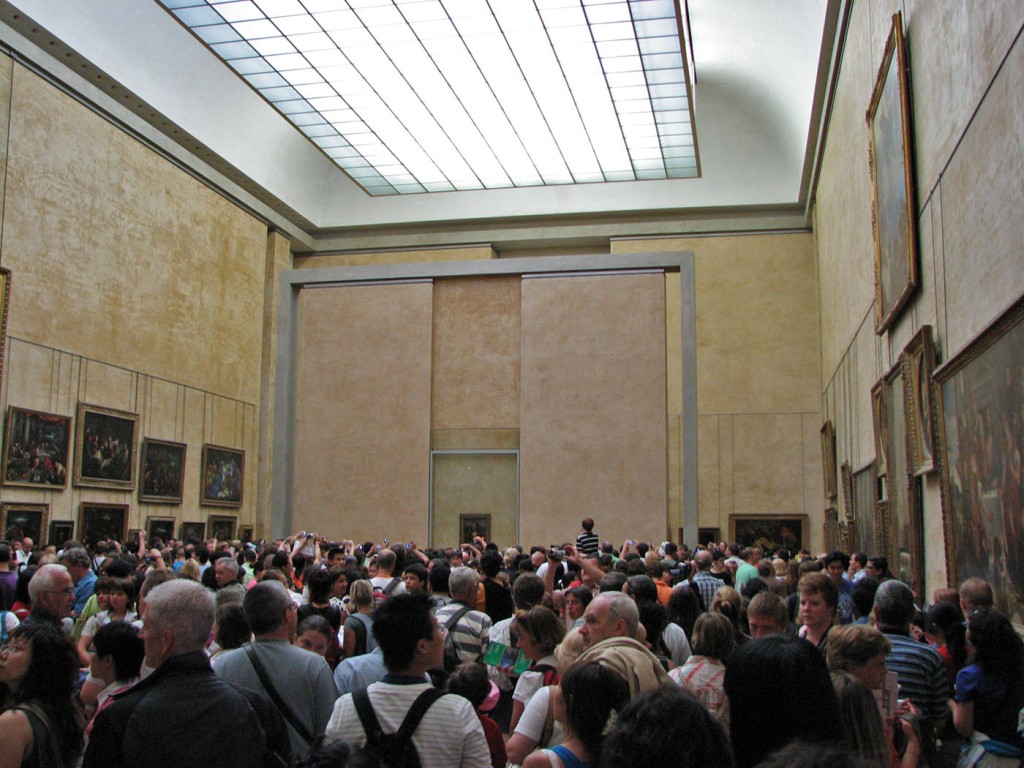 If you’ve been to the Louvre, you know this is what greets you as you get close to the Mona Lisa. It is said that visiting the Mona Lisa face to face has all the thrill of standing in the security line at the airport.

As I waited my turn in the crowd, I realized something very strange was happening.

Everyone there was facing the Mona Lisa, but almost nobody was looking at her.

Instead, they were all looking at the screens of their cellphones.

Most of them, just like me, had traveled halfway around the world and now they were missing the masterpiece five feet in front of them.

I couldn’t believe it.  I watched person after person, snap a photo or take a selfie, and then walk away. Most of them didn’t even look past their phone at the real thing for less than a few seconds.

I stood there silently berating these fools in my mind. Until, I realized that in my hand was my phone, ready to take my photo of Mona Lisa.

I stopped and asked myself… why did I want a photo of this famous painting?

I mean, I already knew what she looked like. Everyone does. You can go onto google and download a life-size image of her. And yet, there was this compulsion in me.

Not only to capture a photo, but to share it. Oh yes, just like everyone else, I was only taking a photo of the Mona Lisa so I could update my status to the world.

Why did I want to do this? What was the benefit of capturing and sharing? And why had I and the rest of the world become like this?

I think we can all agree that life has changed a lot in the past 25 years.   I grew up in the 1980s in Australia. Back then, we had three tv channels, one telephone in the house, and the height of modern technology… the betamax video player.

Thanks to being born in those technological dark ages, I have lived a double life: I remember the world before and after the internet.

In 1991 we saw the birth of the World Wide Web, and the worlds first website. It was the first time someone with an IQ lower than 200 could go online. Today there are 1 Billion websites. There is even a website to show you how many websites there are.

The average person in the developed world now spends at least 75 minutes per day online. For anyone who works on a computer the total can go as high as 12 hours or more.

Before 2000, the internet was pretty much a big catalog and a guest book.But then somebody had the great idea to turn the web into a mirror. Instead of focusing on stuff, we all started to post about ourselves.

Of course today, most of us don’t even use websites or desktop computers. That’s because we have incredible computing power that fits into our hands and handbags.

Cellphones today have more computing power than the computers that filled rooms in the 1970s.

And today we live life inside these tiny colorful boxes. We call them apps. They rule a lot of our time, we go from box to box, sharing and discovering and entertaining ourselves.

Now for a time, I thought I was the only person who noticed that the world had changed. Every time I’d be out in public, I’d see all these people with their heads buried in their cell phones.

But then I realized there are a lot of people who are a lot smarter than me who have discovered this already. They have spent years researching and uncovering why we love technology so much.

First, we desire new and novel experiences, this is sometimes called ‘neomania’. Anything that is described as ‘new’ is exciting and interesting. We crave it and want to be a part of it.

Next is the thrill of the chase. The human desire to know pursue and possess. We are all like a puppy chasing a tennis ball. As soon as we catch it, we want another turn.

Finally, we want the rewards of the tribe. The acknowledgment and engagement from those we know and care about. Today this comes in the forms of notifications on our social media, when we get likes and comments.

These three intrinsic desires by themselves are hard to resist. But when you pack them into a sexy little casing that fits in your hand. They are almost impossible to resist.

But what is the cost?

Well first, it has created an age of narcissism. We all see ourselves as the stars in our own life story. We live to collect and curate our personal brand and share it with our fans and followers. We are the most important in the world, just like everyone else.

Second – and maybe more importantly – is distraction.   If you’ve been to a concert in the past ten years, you know that musicians don’t play to people anymore, they play to cellphones.

We obsessively capture and share the important moments in our lives. We tell ourselves that capturing and sharing it proves we were there. That we are living an amazing life.

Ironically, the opposite is true.  We are actually missing them, living second hand through a screen.

So there she was, right in front of me. The mysterious Mona Lisa. She was looking at me, and I was looking right back at her.

By now you might be thinking… “hey buddy, this was supposed to be a love story”.

And you’re right, it was supposed to be a love story.

You see, there was a reason I was alone in the Louvre museum.

Six months before, my wife and I, had filed for divorce.  We’d always talked about visiting Paris together, but it never happened.

The reason why? She told me all the time.  “Daniel, I’m right in front of you… but you never pay attention.”

It took me standing alone in that crowd to realize what she meant.

For 5 years of my marriage, there she was right in front of me.
She was looking at me, and I was busy doing everything else.

Working, texting, emailing, gaming, ignoring the most important person in my life.

There she was right in front of me.
And now she was gone.

For as long as I could remember, I’d been missing the moment, the masterpiece of real life, right in front of me.  I knew that I needed to change.

When I finally came face to face with Mona Lisa, I put my cellphone away, and I looked at her with my own eyes.

I looked at her smile, her hands, the veil on her head, the background. I actually got a feeling for who this woman was.

For five minutes while everyone else took photos, I took in the moment.

I believe there is a reason why we all love the Mona Lisa. It’s because she looks at you, while you look at her.

She knows the secret.  She knows that the greatest gift that you can give to another person… is presence.

I walked away from the Louvre that day a changed man. I carried that moment and that memory with me.

I could spend another 10 paragraphs telling you how to focus, how to stop being distracted, how to know what’s truly important to you.

But honestly it comes to two words:

When you pay attention, you are paying with your life.

Whatever you focus on, is what you value. You might say you value your children, your husband, your wife, but your actions tell the truth about you.

The comedian Louis CK has a great comedy piece about parents filming their kids at a school performance. He says that if only those parents would put the phones down, they’d see that “the resolution on the kid is amazing”.

There is a lot of talk today about augmented reality and virtual reality.
But you know what is even better? Reality.

In the end, your life is made up moments and memories. Every moment you experience will soon be a memory.

But you can take the moments with you, if you choose to pay attention.